On Sunday 15 May, seventy-five members of the extended Polonsky family gathered in a private home for a reunion. The original Polonsky settlers have all passed on but the reunion brought together one remaining daughter of the original group, fourteen grandchildren and many great-grandchildren and great-great-grandchildren. To mark the occasion, members of the family donated to The Joint to recognise its role in the original migration. Below is an extract of the family’s journey.

Two family-group photographs bookend the migration of the entire Polonsky family from Ukraine to Australia.
The portrait above was taken in Nikopol, Ukraine, when the entire family had gathered at home for Pesach. Yochanan, second from the left in the back row, was on leave from the Army; Jack, Aron, Raphael and Myer worked in various trades in distant towns; and Mechlia lived in a forest town with her husband Chaim. Only Ben and Alec were still living at home with their parents.

In 1911, when Yochanan returned from military service, he and Raphael set out to the newly developed far eastern port city of Harbin (Manchuria) where they hoped to improve themselves. After a two-week rail journey which carried them across the Russian Empire from west to east, the brothers reached their destination only to find that the city was experiencing a serious economic slump.

Early in 1913, Raphael and Yochanan decided to seek new opportunities. Together with a friend, Lazar Frack, they travelled south by train to Shanghai where they embarked on a ship for Brisbane where some other Russian Jews, disillusioned with Harbin, had settled successfully. Without any English, they could only find work as labourers, at first in the cane fields, and later the railways. Unused to the heat and the hard physical labour, they resolved to return to Russia as soon as they could accumulate some money, but something changed for them because after twelve months of back-breaking work, they sent £100 to their father, Ephraim, to pay for the whole family to join them in Australia.
At the time he received the money, Ephraim had already relocated with Chassia and Alec, to the provincial city of Berdyansk on the Sea of Azov; the construction company which employed him had won an important contract to extend the Berdyansk pier.

World War I broke out in August 1914 and almost immediately, Jack and Yechezkiel were called up for military service. This was no time to emigrate; Ephraim put the money in safe keeping intending to emigrate with his family after the end of hostilities. Ben, just a lad of fourteen, who had been under Jack’s care in Warsaw, working as a messenger, returned to his parents. Although both Jack and Yechezkiel were posted to the Austrian front, they were in different sectors. In 1915 Jack was taken prisoner by the Austrians, but in August of the same year, the family received the report that Yechezkiel had been reported missing and was now presumed dead. Aron was called up in 1916 and was taken prisoner by the Turks on the front in the Cauacasian mountains. When he learned that Aron was also a prisoner, Jack who was working in an administrative role in the POW camp in Reichenberg, Bohemia (now Liberec, Czech Republic), arranged for Aron to be transferred to the same camp. After the February Revolution in St Petersburg, the Russian Provisional Government continued to prosecute the war and even Myer was conscripted despite being a husband and father.

After the Communist Revolution took place in October 1917, the new government under Lenin abandoned their British, French and Italian allies (Entente Powers) to make a separate peace with Germany, Austria and Turkey (Central Powers). The Treaty of Brest-Litovsk was signed in March 1918 whereupon Aron and Jack were freed from Austrian prison camp but had to make their own way home over a great distance. Myer’s unit disbanded and he was able to return to his family, but Aron and Jack, having already taken many months to reach their sister’s home in Cherkassy, under Red control, were forced to remain there until the spring of 1919 because Berdyansk was under White control. The civil war interrupted all communications within Russia and Ukraine and as a result, all contact between the family in Australia and Russia was broken.

Only a short time after Pesach 1919, the White forces re-took Berdyansk and both Aron and Jack were conscripted once again. Aron returned six months later seriously sick and was nursed back to health at home. The unending civil war destroyed people’s livelihoods and Ephraim found himself jobless when work on the pier had to be abandoned; he used the £100 to rent a small shop and stock it with salted, smoked and dried fish which he imported from Kerch, at the entrance to the Sea of Azov.

In the Spring of 1922, a two-pronged relief arrived – essential foodstuffs and medical supplies were distributed by the American Joint Distribution Committee, and the family received a reply to Aron’s letter. It was unequivocal – Aron and Jack should marry without delay, and the family was to come to Australia – no-one should remain in Russia. Yochanan was in Constantinople (now Istanbul) with Australian visas for them all; he instructed them to go to Batum (now Batumi, Georgia) and enclosed US currency for that purpose. Yochanan had closed his shop in West Wyalong New South Wales, consigned all his stock to Raphael’s larger shop in Hay, NSW, and proceeded to Melbourne, then the seat of the Australian Government, to obtain visas for the entire family including children and fiancées. He sailed to London where he learned about the work of The Joint in assisting Jews to leave Russia. On that basis, he travelled across Europe by train (The Orient Express) to Constantinople and began to work with the fledgeling Jewish relief fund.

Aron and Rita married in November 1922 in her parents’ home in Crimea. Jack and Shiphra married on Christmas Day 1922 in her mother’s home in Cherkassy, and immediately, the first group began the long journey. Fourteen-strong, the family could ill-afford to attract attention; the second group left two-weeks later in January 1923. Under Red control, the railways were operating reliably but inflation was rampant causing ticket prices to be re-issued every day – one US dollar could purchase fifty million Russian roubles.

The rail journey to the Black Sea port of Batum, proceeded smoothly in three stages: first to Rostov-on-Don (270 km), then to Baku, in Azerbaijan on the Caspian Sea (1300 km), and finally to Batum (700 km). The small Jewish community of Batum was almost overwhelmed by the influx of Jewish refugees. A local grocer, Mr Fantalis, worked as the agent for The Joint; he shuttled repeatedly between Batum and Tbilisi, the capital, (an uncomfortable day-long rail journey in each direction) to obtain exit visas for the refugees, and it was he who negotiated with the captains of cargo vessels to carry groups of Jews to Constantinople in the empty holds.
When the Polonsky family embarked from Batum, a Friday afternoon early in April 1922, the Jewish passengers assembled on the deck for Kabbalat Shabbat and, according to Alec who was twenty years old, everyone participated, their singing strong and heartfelt. He remembered it vividly in his old age – such was their relief at leaving Russia behind.

After celebrating Pesach in Constantinople with Yochanan, the family proceeded, again in two groups, to Port Said, where the first group embarked on Ville de Strasbourg, a French ship, disembarking in Melbourne on 22 May 1923. The second group expanded to include Yochanan who had devoted nine months to working as a volunteer with The Joint while he waited for his family in Constantinople. Together they travelled on Moreton Bay, a new ship of the Australian Commonwealth Line, disembarking in Melbourne approximately two weeks after the first group.

Although Yochanan and Raphael paid the cost for their family’s travel, the migration would not have been possible without the work of The Joint, a remarkable organisation established by wealthy American Jews to improve the welfare of Jews everywhere.

The second bookend is a portrait, taken in late 1924, of a family that in remarkably short time learnt English and settled in Melbourne. Raphael never withdrew his guidance and support until his untimely death in January 1941. Just four months after their parents had disembarked, the first Australian-born members of the family, Roy and my mother, Miriam, were welcomed in October 1923. Five years later, Jack, Myer and Yochanan established Polonsky Brothers, one of the first Jewish-owned Kosher butcher shops in Melbourne. Chassia the matriarch lived until 1935 with her daughter Mechlia who was active in a welcome group for new Jewish arrivals, most of whom settled initially in the suburbs of Carlton and North Carlton. Other members of the family participated in congregational work and as volunteers with Jewish organisations. Myer’s grandson, Irvin Rockman, served as Lord Mayor of Melbourne from 1977 to 1979. Susie, who was just eight years old when she landed in Australia, acted as her son’s Lady Mayoress.

The photographs on the wall behind the group are of the members of the family who died before the migration L-R: Yechazkiel, Mania Polonsky nee Orloff (Myer’s wife), Leib-Ber Polonsky (grandfather), Ephraim, Chaim Spivakovsky (Mechlia’s husband) 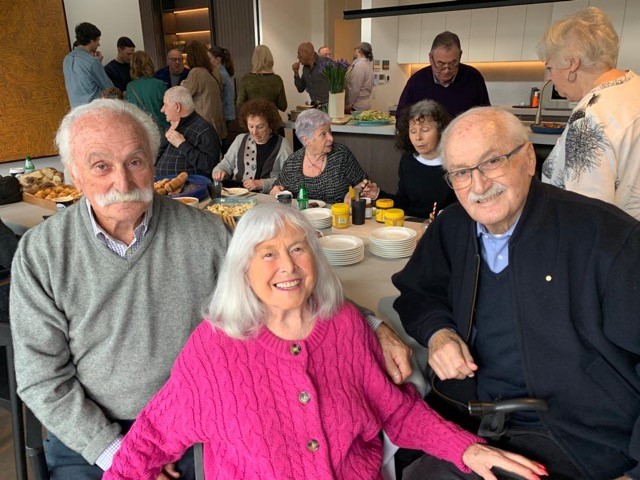 At its most recent reunion, on Sunday 15 May 2022, seventy-five Polonskys and descendants marked the occasion by donating to The Joint which once again is working to rescue Jews in Ukraine.